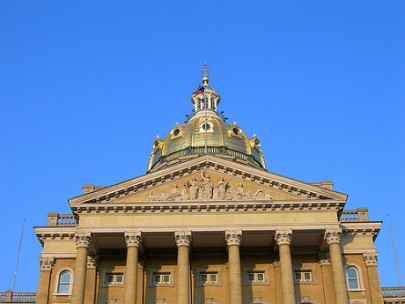 While solar advocates didn’t get everything they wanted in the Iowa legislature this year, a nearly-unanimous vote to triple the state’s tax-credit fund for rooftop installations is expected to have a major impact.

Provided the bill is signed by Gov. Terry Branstad, it also could be a prelude to bigger developments next year, according to two lawmakers.

“I think this will give an enormous boost to an already rapidly-growing solar industry,” said Sen. Rob Hogg, one of the measure’s sponsors. Increasing the available tax credits “will allow us to keep up with the growth and boost it further.”

In addition to tripling the available tax-credit funds from $1.5 million to $4.5 million annually, the measure increases the maximum credit. For residential projects, the cap has been hiked from $3,000 to $5,000. For commercial projects, it’s been increased from $15,000 to $20,000. The law also enhances the total allowable claim from the current 50 percent of the federal solar tax credit to 60 percent of it.

Hogg thinks perhaps the bill’s most potent provision is the one allowing businesses with multiple locations — like retail chains, for example — to receive a separate tax credit for each facility. Businesses are the leaders in adopting solar in Iowa, according to Hogg, and allowing them to apply for a separate credit for each location puts a whole new spin on investing in solar energy.

“A lot of businesses have taken advantage of solar energy,” he said. “It’s being spread through the business community.” With the possibility of a $20,000 credit for each location with a solar installation, he said, “The day is coming when it will be the norm to put solar into a business project. I think we’re getting very close to that point.”

State Sen. Joe Bolkcom, who also advocated for the tax-credit expansion, expects “a lot more projects to be deployed” as a result. “There’s been a lot of interest in the credit.”

In fact, applications for the credit in 2013 far exceeded the $1.5 million available. A revenue department spokeswoman said that as of April 15, applications for about $755,000 in state tax credits were on a “waiting list” because last year’s $1.5 million pool was exhausted. Once the governor signs the bill, the agency will have the funds to resume processing those.

“He told advocates at a recent forum that if it got to his desk, he would sign it,” Bolkcom said

If the bill becomes law, installers generally expect the expanded benefits to add fuel to the solar fire.

“It will help keep the momentum going on solar,” said Roger Garde, who sells and installs solar systems in southeast Iowa. “People ran into the cap last year. Businesses maxed out and some homeowners did too. There were people who would have put in a bigger system, but they stopped because they ran into the rebate limit.”

People who run businesses out of their homes, and farmers – many of whom power their farm operations and homes on one residential meter – would gain from a higher cap, Garde said.

Michelle Wei, a solar installer based in Des Moines, predicted that more generous tax benefits “will definitely give some push to solar.” In particular, because of the $5,000 increase in the commercial solar cap, she believes that “on the commercial side it will pick up.”

Mike Haman isn’t so convinced. As the industrial program manager of the Iowa Energy Center, he closely monitors solar installations statewide. Lately, they’ve been concentrated in the part of Iowa served by Alliant Energy, which offered an extremely generous solar benefit last year. The Iowa Utilities Board allowed the company to terminate it last Dec. 31.

After those projects are completed later this year, Haman said, “I’d expect the activity will start to decline. If I saw more of a balance between MidAmerican [territory] and Alliant [territory], my conclusion would be different.”

Alliant’s solar rebates typically ranged between $7,000 and $10,000, Haman said. Even with state tax credits boosted to $5,000, he said, solar is now much less profitable for customers of Alliant without the rebates.

The flip side of that, Hogg pointed out, is that only about one-quarter of Iowans get their electricity from Alliant. So for the other three-fourths of the state’s electric customers, this expanded tax credit will be a gain.

‘Next year we’ll be back’

Hogg and Bolkcom expect to see more solar policy advancements during the 2015 legislative session. Given the overwhelming and bipartisan support for the tax credit bill – 46 to 0 in the Senate, and 90 to 4 in the House – Hogg thinks there’ll be support for more solar moves next year.

“Next year we’ll be back addressing the regulatory framework for solar,” he predicted. “The utilities need to find a way to make solar work for their customers.”

He’s spoken to the state’s major utilities, and believes they “are ready to embrace solar.”

Bolkcom, too, expects some further developments next year.

“We have some interim work to do, to see what it might look like,” he said. “There’s going to be some effort by utilities and advocates on how we can work together on building a renewables agenda.”

Hogg thinks that history could provide a way forward. About a decade ago, he said, wind was at the stage of development that solar is now. The legislature passed laws permitting utilities to own wind farms, and allowing for major changes in the way rates are set. As a result, he said, wind energy took off. It now generates about 27 percent of the power produced in Iowa. 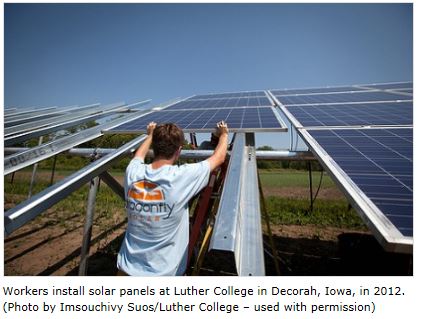 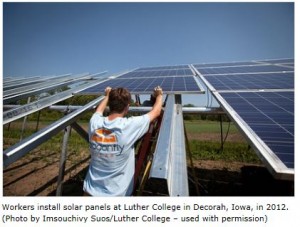 Solar energy, already on a roll in Iowa, could get another boost from three bills under consideration in the state legislature.

One bill, introduced on Wednesday, requires Iowa’s major investor-owned utilities to install 105 megawatts of solar power by the end of 2020, among other provisions.

Another would appropriate $18 million to the state’s three major universities, requiring each of them to install at least two megawatts of solar capacity by June 2017.

A third bill would double the money in the state’s tax credit fund for solar or other renewable energy systems. The fund was created in 2012 with $1.5 million in tax credits to be made available each year. Iowans collected about $620,000 in 2012, and claimed the full $1.5 million in 2013.

In fact, 94 applications in 2013 came in after the fund was depleted for the year, according to an Iowa Department of Revenue spokeswoman, and will be the first applications processed in 2014.

“I’d like to make sure all the projects applied for in 2014 get funded,” said state Sen. Rob Hogg.

He believes an expansion of the tax credit has a good shot at passing, considering the widespread – and bipartisan – support when it was initially approved in 2012. It passed on votes of 45 to 1 in the Senate and 82 to 14 in the House of Representatives.

“I’m hopeful we can make the case for job creation,” he said. “Like a lot of things in the energy sector, we provide incentives to get them going, so people can see the promise of solar.” 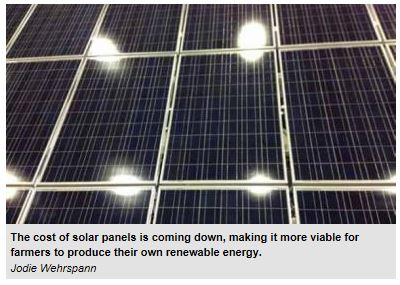 High up-front costs have steered many farmers away from investing in their own solar or wind energy plant.  But that scenario is changing with the rise in energy prices and a concurrent drop in material costs for installing a solar or wind plant.

“In the last four or five years, the cost of solar systems has actually been cut in half,” says Mark Olinyk, president of Harvest Energy Solutions, a Midwest energy distributor specializing in the farm market. “The technology is getting better, and the solar panels are much more efficient.”

Solar and wind are the two most common forms of renewable energy in the U.S. But Harvest Energy Solutions says sales of solar have dramatically surpassed wind over the last couple of years. The company says the current trend across all states is leaning toward solar because the entire solar installation is getting cheaper.

With wind, Olinyk says the cost of your investment is basically the price of steel, magnets and copper used to construct the turbine, none of which has come down in price.

The company installs 10kW (solar) systems or larger. A typical system costs anywhere from $3 to $3.50 per watt, which means a 10kW array would cost about $35,000. That size of an array can power an average house. The energy, or kilowatt-hours produced, is typically used first, and the additional energy created and not immediately used is fed into the utility grid and stored there to provide a backup supply of energy when needed. 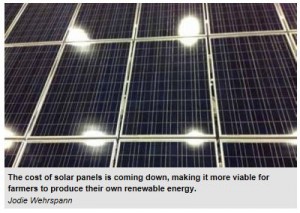 Many farmers could justify getting an alternative energy system, especially with the number of incentive programs available. For example, the federal government is offering a 30% income tax credit to those buying a solar or wind installation for a home or business. This tax credit will be in effect for installations until Dec. 31, 2016. Additional national incentives and available rebates are listed at energy.gov/savings.

“We have literally installed solar arrays on farms where the farmer has all of his investment returned to him after one tax cycle. This doesn’t happen all of the time, but it does happen.”

Olinyk says farmers in the Midwest should consider both solar and wind systems when calculating payback. “In some regions of the country, a wind turbine may be the better option.”

“We do site assessments for every potential customer. We will compare the costs of wind and solar, measure the projected energy output, and determine the [return on investment] for each one. And we give you a conservative estimate on the returns.” 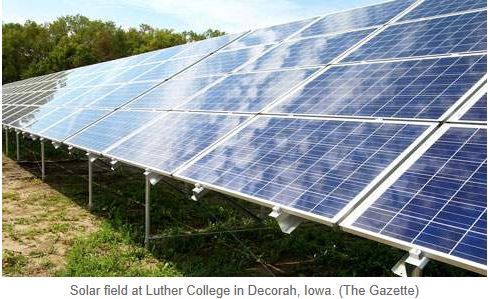 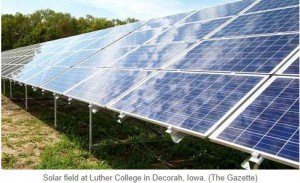 Iowa awarded $1.36 million worth of tax credits to individuals and businesses in 2013 for installing solar energy panels and related equipment, almost hitting the annual cap of $1.5 million for the green energy tax breaks.

The Iowa Department of Revenue, in an annual report released Thursday, reported it awarded 264 tax credits for solar energy systems through Dec. 27. The agency said that number could still grow as not all applications received in 2013 were processed at the time of the report’s release.

Iowa’s solar energy tax credit was was enacted in May 2012, but was retroactive to solar energy systems placed in service on or after Jan. 1, 2012. 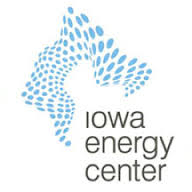 According to Bill Haman, Iowa Energy Center’s Alternate Energy Revolving Loan Program (AERLP) manager, solar power is growing at a record pace around the world and Iowans are joining the bandwagon, especially on the eastern side of the state, while the western side is showing little interest. Mr. Haman sees this as odd, as Western Iowa is actually a “slightly better” location for solar power than Eastern Iowa. He explained that solar power is best in the extreme southwestern corner of the state and that it diminishes the further northeast you move.

Mr. Haman said there’s no time like the present to go solar if your surroundings meet the requirements because the price is lower than ever: “It’s low enough that it’s extremely competitive with any other alternative a homeowner may chose to explore…That compounded with federal and state incentives that are available makes it a very appealing opportunity if your residence is set up for it.”

When it comes to installation, according to Haman, the process is actually quite simple. Solar panels need to face south and be mounted on a rooftop in an urban setting, due to large trees or surrounding homes potentially casting shadows on the panels. A solar inverter needs to be installed to convert power for use as well. Since solar systems usually do not have any moving parts, they require little to no maintenance.

Those looking to install such a system need to work with a building inspector, secure the proper permits, submit an application to their local utility company, and should install energy efficient appliances, lights and insulation for maximum efficiency.