The top 25 companies in the United States installed 28 percent more solar capacity this year over last as the costs for doing so continue to decline and fossil-fuel prices increase and become more volatile, according to a new report from a solar trade association.

Among more than 40,000 businesses, nonprofit and governmental locations throughout the country, there was over 4,500 MW installed as of mid-2014.

“Without question, continued cost declines and attractive financing terms are driving solar growth nationwide,” SEIA spokesman Ken Johnson said in an email. “But effective public policies, like the 30 percent solar Investment Tax Credit (ITC), are critically important, too, because they’re helping to bring down the cost of solar, making it more competitive with traditional energy sources.”

The report features some of the largest companies in the U.S., with several Midwest-based companies — such as Target, General Motors, Kohls and Walgreens — cracking the top 25 in the amount of capacity installed.

Walmart leads the country in capacity (105.1 MW) and number of systems (254) installed. Ikea, meanwhile, leads in the number of states where it has installed PV systems on its buildings (20) and the percentage of its buildings that include solar installations (87 percent).

Retailers in general lead among sectors of the economy.

“Long-term cost savings make solar an attractive option for businesses. Larger companies, like Walmart and Target, have hundreds of buildings that use a tremendous amount of energy,” Johnson said. “Simply put, they are saving real money on their utility bills — while helping the environment, too.”

Volkswagen leads the auto industry with slightly over 10 MW of solar installed at its U.S. facilities, which includes the 33-acre system next to its plant in Chattanooga, Tennessee.

As average electricity rates have increased for commercial users, the report says the costs for installing on-site solar are declining. For businesses sampled in the report, average electricity prices have risen 20 percent over the past 10 years while the average price of a PV project has dropped by more than 45 percent since 2012.

While companies in California and the East Coast continue to dominate the commercial market, southwest Ohio and southeast Michigan lead the Midwest in the number of installations, according to SEIA data. But favorable policies are leading to increased output elsewhere in the region.

“The Midwest hasn’t seen a huge amount of solar activity but Minnesota, Illinois and Missouri are gearing up pretty quickly,” Johnson said.

He added that growth is occurring “mostly in places with the right mix of forward-looking public policies, higher utility rates and, to some extent, days of sunshine. This translates mostly into coastal or high-population density states with transmission constraints that make utility rates higher.”

The report also recognizes third-party ownership — while more popular in the residential sector — as “a dominant force in the solar market.”

“Third-party ownership has been the clear leader in residential financing in recent years, but it has been more evenly split in commercial,” Johnson said. “That said, one challenge is financing small commercial systems since the companies that would host them often times do not have credit ratings or have other issues that complicate lending.”

At the time, solar manufacturing was rising in Europe, states were starting to set renewable portfolio standards and the federal government was providing a 30 percent tax credit for solar installations. By 2010, the company was installing systems for businesses.

“Now is a good time to get into solar,” Perna said of the time.

Now, he sees big businesses — such as those highlighted in the SEIA report — increasing their capacity for two reasons: Because it’s part of a bigger sustainability plan and because it makes financial sense to do so.

“While some customers may be doing it for a sustainability benefit,” Perna said, “a majority of sales are being done because the price point is cheaper than or competitive with the grid.” 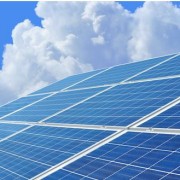 Notice of Funding Availability for the Rural Energy for America Program 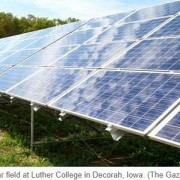 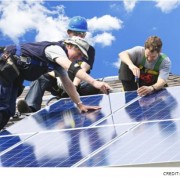 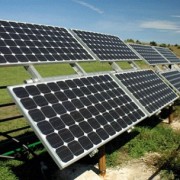 Legislation Would Give Solar Power a Boost in Iowa 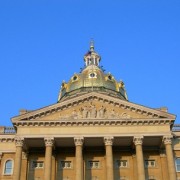